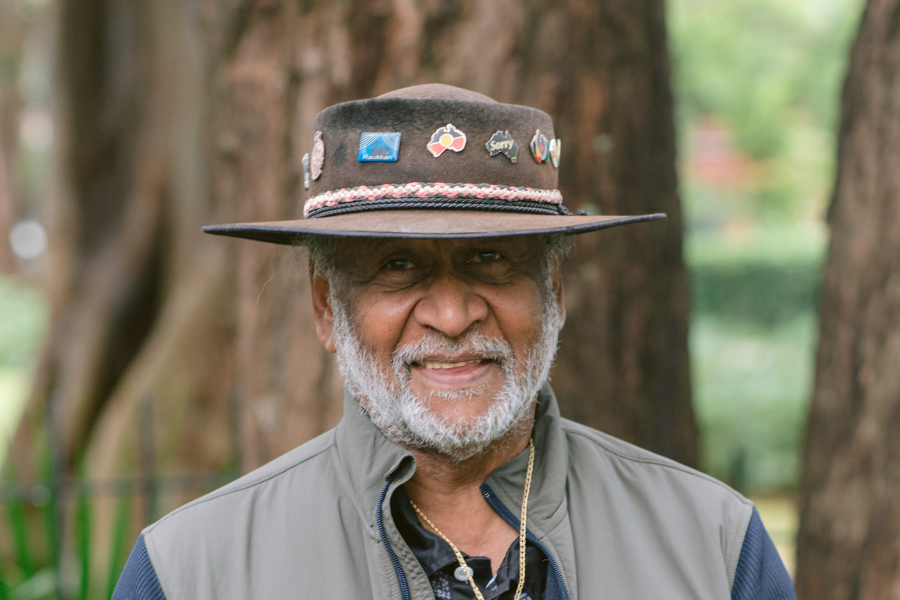 As Australians, let us make a sacred affirmation and recognition together, to recognise our collective responsibility to care for our Mother Earth so that our future generations are not robbed or deprived of their rightful inheritance which is our responsibility to pass on to them, these same entitlements and benefits that our ancestors passed on to us for our benefit and enjoyment.”

Uncle Ray is an advocate of climate and social justice, dedicating his life to supporting the Stolen Generations of Aboriginal people. He is an active Executive Member of the Indigenous Peoples’ Organisation Australia (IPO), which is a national coalition of 300 Aboriginal and Torres Strait Islander peak organisations, community organisations and individuals who advocate for the rights of Indigenous peoples.

The IPO draws on United Nations mechanisms and instruments, such as the Declaration on the Rights of Indigenous Peoples, to assert the recognition of Indigenous Peoples’ rights within Australia. Ray is also Director of Bunji Consultancies, providing strategic analysis, advice and services to improve achievement of environmental and organisational developmental goals.

The IPOs scope of work has increased substantially over the last few years. Uncle Ray has noticed a growing need to focus on the interplay between climate change and mental health, with burnout becoming an issue within the advocacy space. Australians have been confronted with the increasing severity of climate change in recent years, with the 2019-2020 bushfires and then the floods in Queensland. The IPO has been looking for ways to help everyday people rebuild their resiliency and improve their mental health, so that we can all become more engaged and ready to tackle climate change.

As it stands, I don't think that anyone is apathetic to climate change, but there are barriers to engagement that are causing burnout and serious mental health challenges.”

Uncle Ray believes that local climate action within communities, supported by strong national policies and investments, will help people feel more interconnected, hopeful and prepared to adapt to a changing climate. He believes that a cohesive national strategy must also include political system reform and a deeper appreciation and integration of Indigenous cultures, so that we can forge a better, climate-safe future.

Uncle Ray sees that Australia has the unique advantage of being able to support several renewable industries. All governments must see the development of these industries as a top priority, so that we can replace fossil fuel industries and support local jobs. He sees a future for Australians that is supported by strong renewable industries, which will afford us long-term economic and energy security and will ensure that local manufacturing thrives in Australia. Uncle Ray also sees the need for national mitigation and adaptation planning that aligns with State and Local Government policy.

We need Treaties to establish strong Indigenous Australian voices in parliament, and part of this must include an honest and open discussion with all Australians about climate change.”

By acknowledging the impacts of climate change on native species, and our lands and waters, Uncle Ray believes we can better understand the stakes and work towards a common goal of protecting what remains. In discussion with the Pastor, it became apparent that he believes we have many opportunities ahead of us to protect our local cherished places by helping climate action to resonate with everyday people. Climate change, land and water rights are deeply interconnected, and the IPO seeks to elevate this understanding onto the political agenda.

Last year saw the resounding success of the IPOs Heal Country Heal Climate report, which outlined priorities for climate and the environment, developed to inform the 26th United Nations Climate Change Conference of the Parties (COP26) and climate and environment priorities for Aboriginal and Torres Strait Islander peoples. Uncle Ray attended COP26 alongside two other representatives of the IPO, Dr Virginia Marshal and Tishiko King. The group’s involvement with COP26 helped to drive home the need for the Australian Government to recognise Indigenous Australians’ right to self-determination, and how climate change, land and water rights are all interlinked. Delivering climate justice must include justice for Indigenous peoples.